Long before Sergio Ramos became a Real Madrid colossus, he was little more than a frail prospect at Sevilla.

Although immensely talented, the 6ft tall centre-back played at right-back at the Ramon Sanchez-Pizjuan Stadium.

Quick across long distances and with incredible stamina, the teenager knew he needed to work on his core strength and explosive power if he were to develop and achieve his undoubted potential.

After moving to the Bernabeu in the summer of 2005, Ramos did not play in the centre of Madrid’s defence until 2009 thanks to an injury to Pepe.

However, the fiercely determined Spaniard made the position his own and started to dominate LaLiga attackers whilst maintaining his electric pace.

Speaking about his work ethic, he told UEFA: “I get up every day with the same desire to keep improving which I’ve had since I was a kid. I’m not looking for recognition. All I want to do every year is do even better, forget what we’ve won and set new challenges. I’ll keep going as long as the body allows it.

“My grandfather and father always told me that even if there’s only one second left, there’s still hope. You’ve got to have that attitude, and that’s always been the attitude at our club.

“To set an example, you have to perform well, work hard and give your all; show the younger lads so you can ask the same of them. I’m very happy to have the chance to lead this team.

“I’m happy if I’m a role model. I think I’ve fought and sacrificed a lot, so that when I retire I can do so with my conscience clear, after having won everything there is to win.

So how exactly did he manage to transform from a scrawny right-back to the ripped defender who takes no prisoners today?

The most crucial part of Ramos’ transformation was to correctly fuel his body with the right food to allow him to bulk up safely.

Without wanting to add unnecessary muscle or lose any speed, the key was to get the right amount of calories as opposed to simply increasing the volume.

In an interview with High Snobiety, Ramos revealed his breakfast is easy to replicate before training.

He said: “I usually take a coffee, some whole-grain bread with protein like turkey breast or a poached egg, and a piece of fruit.

“It’s a nutritious, balanced breakfast. If we don’t have a training session with the team, I take something a bit lighter.” 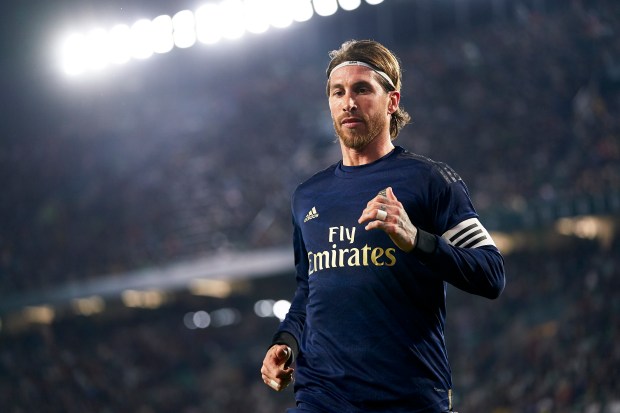 Ramos favours high-intensity workouts which are based on functional movement. What this means is he focuses on core strength and targeting specific muscle groups each time he trains.

He then mixes this with isometric work outs to improve his muscular endurance as well as cardio.

Although he can be seen exercising regularly at home in his own gym, everything is done under the supervision of the Real Madrid medical team to compliment muscle density and on-pitch training.

Someone called the waterboy?

What has been said about him

“Sergio Ramos is the toughest opponent I’ve come up against. He is very strong, has a lot of experience, and is a very competitive player.”
Luis Suárez, Barcelona forward

“Ramos doesn’t surprise me. It’s what he has – a big personality … he’s always there, always encouraging players and he never drops his guard. He never gives up.”
Zinédine Zidane, Real Madrid coach

“There are defenders with extraordinary technical ability, others have unique defensive qualities – like [Fabio] Cannavaro, brilliant at marking. Others, like [Franco] Baresi, can command a back line while others influence with strong personalities. But factoring everything together to evaluate a defender? Then Sergio Ramos is the most complete. He’s got a bit of everything: technical ability, strength, personality and leadership.”

“He defends well, can play, and manages all facets of the game. He’s a very complete footballer.”
Thiago Silva, Paris Saint-Germain captain