As Jimmy Greaves turns 80, the football world will celebrate one of its greatest players.

One of the finest goalscorers in the history of the game, a lethal, yet delicate, finisher, well ahead of his time.

It wasn’t the easiest of lives in the sport with plenty of highs and lows despite his extraordinary talents on the pitch.

Those who watched him and those who played alongside him will have their say about his abilities and his attributes, both on and off the field.

Sadly, a stroke in 2015 means Jimmy himself is no longer able to tell the story of his career in detail, while there is now a petition to get him an honour.

But thankfully Greaves, who would later become a star on screen, has previously spoken candidly about his life in the Beautiful Game.

So what did he share about his life back in 1990, in conversation with Brian Moore? talkSPORT.com takes a look.

How the Premier League table would look without VAR

Haaland to the Premier League? 'Not this summer, no chance', says ex-Norway star

Why he was wrong to move to Italy…

“I think it was a mistake in as much as that I would have liked to have made it successful and wasn’t able to because of my own inability to settle down.

“Not so much from the footballing point of view because I settled in quite well football-wise.

“It was the mistake of a young man doing the wrong thing at the wrong time.

How he left AC Milan…

“I was playing well for Milan and scoring goals. To the Italians that didn’t make sense. Why does this unhappy guy keep going on the football field and score goals, maybe he wants more money?

“That’s what they kept doing, offering you more money, and you kept saying, ‘no, I want to go home’.

“They kept saying ‘you’re scoring goals, you’ve got to be happy’, but I wasn’t happy. I was scoring goals out of misery.

“Eventually they realised that it had come to the stage where I was prepared to do anything to go home.”

“It was very unusual actually. I don’t know what went wrong there.”

“They were very difficult times because I had come back to a very great side. A Double-winning side. And because of the bad press I’d had and the bad publicity over the Italian business I think I had to prove myself to what was a great team and a great bunch of players.

“To say I wasn’t readily accepted would probably be a little bit forceful but it was a difficult thing to go into the dressing room because they thought ‘well, here comes this spoil brat’, which I don’t believe I was but that was the image that was conjured up in those days.

“The only way you could do it was by doing what one did, and that was become part of the team both on and off the field.” 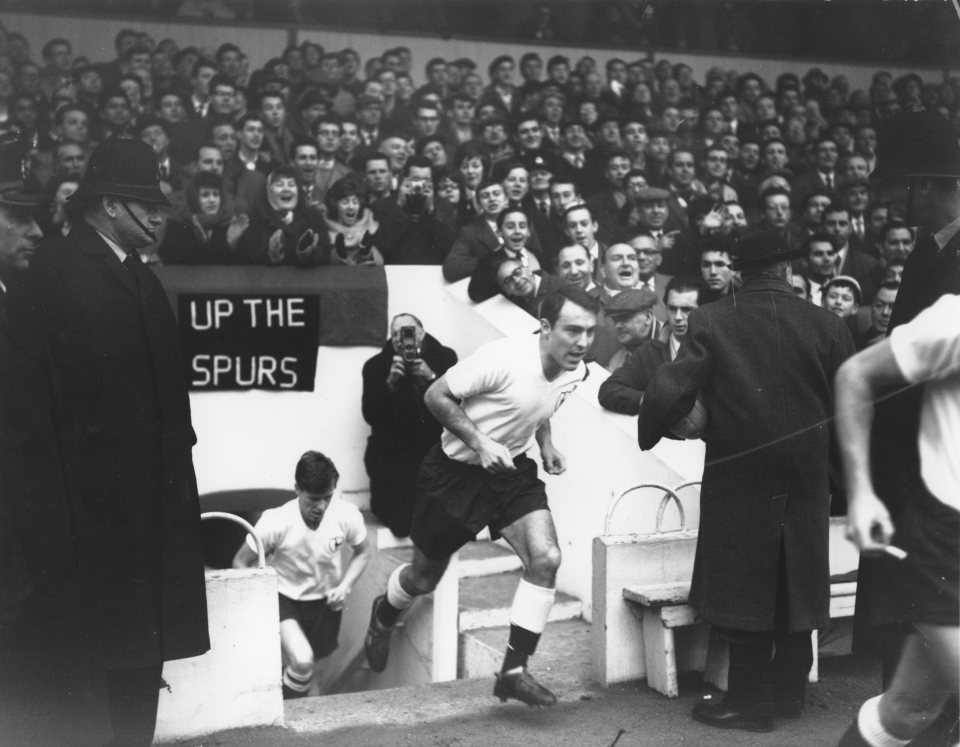 “Tottenham fans aren’t the easiest. A lot of players have suffered because of it. “Fortunately for me I think they were looking for something a little bit special.

“Fortunately for me I was able to give it to them on the day [on debut against Blackpool] in the form of three goals and a resounding 5-2 victory.

“I feel from that day we struck up, immediately, a great relationship.”

“I think, quite honestly, I never had that sort of ability.

“The idea of scoring goals was to slide them in or get them in the best way you can. And it’s not necessary [to use power], you see a lot players make the mistake that they have got to blast it. They haven’t.

“Pick your spot. I think in doing so you probably get more goals that way.”

Scoring four goals against Liverpool in 1963…

“Arguably people will still say that was the greatest Liverpool side. The early side which included Roger Hunt, big Ron Yeats, and my old pal Ian St [John], and Gordon Milne.

“I thoroughly enjoyed it.”

“I started in the side. I had managed to fight my way back into the team [after illness] and I’d had a couple of good games prior to the World Cup. I remember a particularly good game against Norway.

“I felt right for the World Cup but it didn’t happen for me.

“Essentially, you see, the truth was I had five stitches in my shin after the France game, which was a big gouge and you could see the bone and it took a bit of time to clear up.

“It had got a little bit dirty and was a bit septic. There was no way I was fit anyway for the Argentina game, so I wasn’t dropped. I just wasn’t fit.

“If you say was I disappointed I didn’t play in the 1966 World Cup [final], of course I was. I was devastated but it wasn’t Alf’s fault. It wasn’t my fault. It was just the way things happened.”

On his Spurs exit…

“It was on the day we moved house. I got a phone call from Bill Nicholson. It was a strange call because he said, ‘is that you, Jim’, I said ‘yes, Bill’.

“He said, ‘I’d like to buy him but [West Ham manager] Ron Greenwood wants you in part-ex, would you go over to West Ham. It needs to be done in the next hour or so because of the transfer deadline’.

“I put the phone down and thought after nine years or so that I just felt a bit disillusioned with it all.

“I thought dear old Bill, for who I have no greater admiration than any man on earth then Bill Nicholson, could do it.”

“Oh, yes. Very much so. I was at Tottenham a while ago and Brian Curtin [former club medical officer] came up to me and said, ‘you’ve never forgiven us for the way we got rid of you, have you?’

“I think it could have been done a lot better. I didn’t want to go. I never asked for a transfer. I’d never put in for a move. I’d never once intimated to Bill that I wanted to leave the club. I just wanted to find my form do my rally and then come back the following season and start afresh.

“I still felt I had a lot to offer Tottenham. I had nothing to offer West Ham. My heart was still at White Hart Lane, really.”

Retirement and not signing for Brian Clough…

“Oh, [I retired] far too young. To be honest, it was that I was a bit fed up with the West Ham situation. I should have gone to Derby County. Brian [Clough] wanted me and really I wish I had gone.

“One of the great things I would have loved to have done was play under The Governer, The Man.

“He’s just got a magic and an aura that’s around him that very few others have. His record stands for itself. He’s done things no other managers have done.

“He’s done things slightly differently. He’s an extrovert, saying what he thinks, telling people this, that, and the other. Having the guts and the courage to be in there pitching and battling.

“To me the man is the greatest and that’s the end of it. I’d have loved to have played underneath him.”