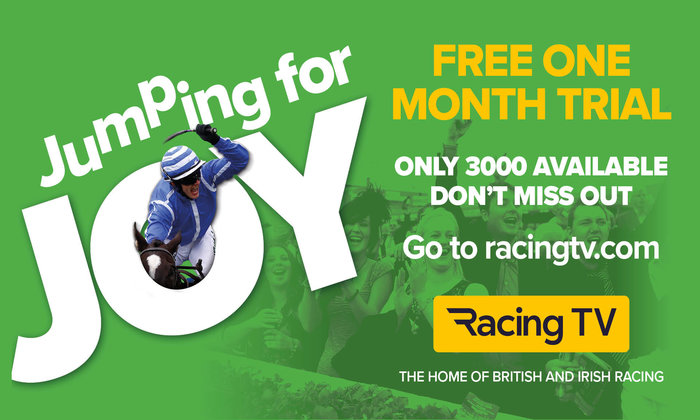 To celebrate the return of the Jumps season, talkSPORT and Racing TV have teamed up to give away a mega prize of a 40” TV, a Racing TV gilet and a year’s subscription to Racing TV, the home of British and Irish racing.

Racing TV have 3,000 free one month trials to give away on a first come first served basis! You can watch over 60 live meetings with your free trial on TV, tablet and mobile. This is Racing TV’s biggest ever Jumps season showing all the meetings that matter across Britain and Ireland.

Head to racingtv.com/freetrial now for more information and to start your free one month trial.

Please note that by entering this competition you consent to having your details used in accordance with the Wireless Privacy Policy and your data will be used to contact you in case you are selected as the winner.

Free Trial Terms and conditions: Offer available to new and reinstating Racing TV customers until November 24, 2019. Free trial will automatically revert to a full price membership at the end of the promotional period if not cancelled within 30 days. 12-month minimum term will apply. Free trial not applicable on Virgin Media, Vodafone and Eir TV. For full terms visit racingtv.com/freetrial

Deontay Wilder has promised to retire if Tyson Fury delivers on his promise to knock him out inside two rounds. The heavyweight pair will meet once again on February 22 in a rematch of their epic 2018 encounter as Fury seeks redemption. Despite boxing superbly for 12 rounds, the Brit left the Staples Center on […]

Tottenham and Watford supporters united their voices to protest against VAR during their Premier League clash on Saturday. The introduction of Video Assistant Referee technology in the Premier League has caused widespread controversy and public outcry this season. Fans, managers and players have all been left fuming by VAR at times this term but a […]

How will Mikel Arteta’s Arsenal side cope without Pierre-Emerick Aubameyang against Sheffield United? The Gunners come into this game after a 1-1 draw away against Crystal Palace last time out, a game in which Aubameyang opened the scoring only to get sent off less than ten minutes after Jordan Ayew pulled Palace back into the […]

Leeds United missed the chance to go top of the Championship table after suffering a 1-0 defeat to Queens Park Rangers on Saturday afternoon. After Fulham claimed all three points at home to Middlesbrough on Friday night, the Whites knew they could push away from the dreaded Play-Off places and leapfrog West Bromwich Albion before […]

Harry Maguire may well be the new Manchester United captain, but club legend Gary Neville was quick to issue a stern warning to the England international. Maguire succeeds Ashley Young in the role after the 34-year-old completed his move to Inter Milan on Friday evening. The centre-half moved to Old Trafford in the summer for […]

DJs are now concerned about their safety after the shooting of DJ Evolve, real name Felix Orinda, by Embakasi East Member of Parliament Babu Owino. Deejay Xclusive is among those who have come out saying that he is yet to come to terms with what happened, and he is very concerned and hurt at how […]