Tottenham’s wretched form this season hit a new low when they were torn apart at home against Bayern Munich in the Champions League on Tuesday night.

Mauricio Pochettino’s men were hammered 7-2 by the Bundesliga giants, in a game which saw former Arsenal man Serge Gnabry score FOUR goals in the second half.

This is the first time Spurs have conceded seven at home in any major competition and they also became the first English side to concede seven goals in any European competition since Spurs themselves lost 8-0 to Cologne in the UEFA Intertoto Cup in 1995.

Worryingly for Spurs supporters, this is not the club’s first setback this season.

It’s clear there are issues at Spurs and everyone has their own theory behind the root of the problem.

Criticism of chairman Daniel Levy has been rife in recent weeks and some fans have even called for Pochettino to go.

However, some theories border on the ridiculous during a time of crisis.

There’s one involving Christian Eriksen and Jan Vertonghen and the former even felt the need to address the rumour on Twitter.

Responding to a tweet from @CasualMind_ which suggested Eriksen’s ‘wife’ – he’s not married – was having an affair with Vertonghen, Eriksen simply labelled it as ‘b******t’, with a sleeping face emoji.

Minutes later, Vertonghen responded to dismiss these allegations too by posting three upset face emojis as well as a love heart emoji to Eriksen. 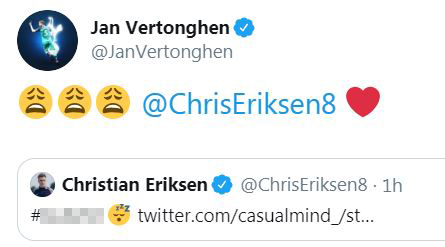