Jamie Vardy bagged a second-half brace as Leicester climbed to third in the Premier League by crushing ten-man Newcastle 5-0 to turn up the heat on Steve Bruce.

The Foxes were on top from the moment Ricardo Pereira opened the scoring just after a quarter of an hour but Isaac Hayden’s red card on the stroke of half-time was the catalyst for the floodgates to open after the interval. 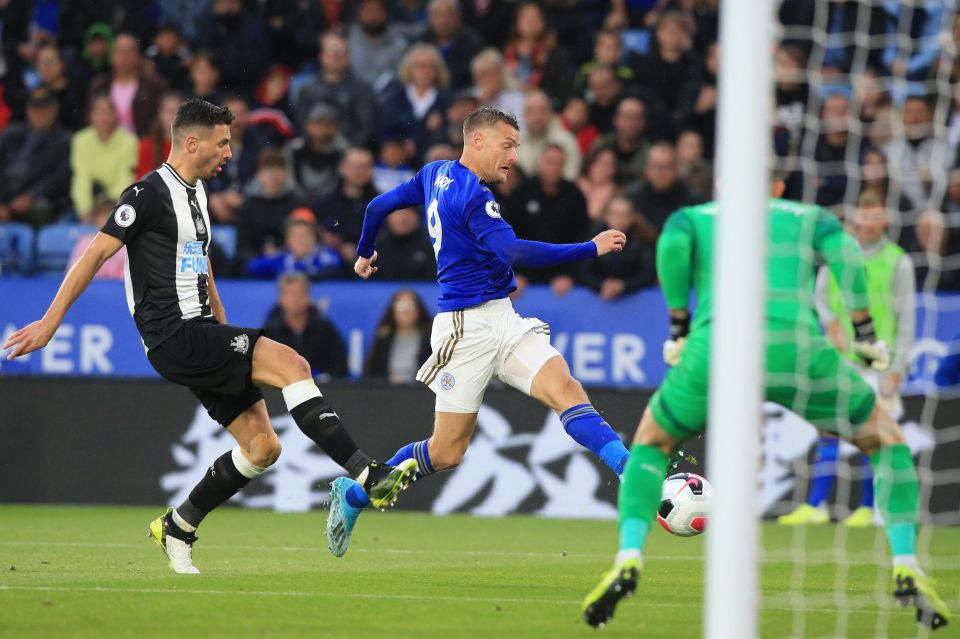 Jamie Vardy has scored 14 goals in 17 appearances under Brendan RodgersVardy was the principle beneficiary as he found the net twice, either side of Paul Dummett’s unfortunate own goal, before Wilfred Ndidi struck late on as Leicester claimed their fourth win from their last five top-flight matches.

Leicester have been tipped to break into the top-six this season and, though stiffer tests await, they were ruthless against the only side to defeat them at home since Brendan Rodgers took charge in February.

Much has changed for Newcastle since a 1-0 win on their last visit to the King Power Stadium, not least that their goal-scorer in that fixture, Ayoze Perez, now plays for Leicester following a £30million summer switch.

The forward made a bright start in the pouring rain and had a hand in Portuguese full-back Pereira’s opener, playing his part in Newcastle sinking to their fourth defeat in seven fixtures, keeping them second bottom in the standings and leading to further scrutiny of Bruce’s position.

Perez had an opportunity to silence the travelling supporters who jeered his name as the teams were announced but the Spaniard shot tamely at Martin Dubravka after a cut back from Harvey Barnes in the first couple of minutes.

However, after Yoshinori Muto got his legs in a tangle trying to make contact with Hayden’s cross-cum-shot in a rare sight at goal for Newcastle, Perez played a minor role in Leicester’s 16-minute opener.

Having exchanged passes with the summer signing on halfway, Pereira took advantage of Newcastle’s defence backing away to drive towards the edge of the area before drilling a low effort with his weaker left foot beyond Dubravka.

Ben Chilwell could have doubled Leicester’s lead moments later but Dubravka got a hand to his attempted dink before the England full-back saw his follow-up cleared off the line by Newcastle captain Jamaal Lascelles.

Newcastle had beaten Leicester on their last two visits to the midlands but hopes of a hat-trick receded when Hayden was given a straight red card for a reckless follow through on Dennis Praet in a 50-50 challenge.

While the midfielder protested referee Craig Pawson’s decision, with Lascelles having to lead his team-mate down the tunnel, replays showed his contact with Praet’s standing leg was high despite winning the ball.

The dismissal prompted Newcastle head coach Steve Bruce to bring on midfielder Ki Sung-Yeung for Muto and the visitors retreated further into their shell.

They fell further behind in the 54th minute when Vardy’s first-time strike from an acute angle squeezed underneath Dubravka, who was beaten far too easily at his near post.

There was little the Newcastle goalkeeper could do for Leicester’s third three minutes later, wrong-footed after Praet’s attempted cross deflected off Dummett and trickled into the net.

Premier League Team of the Weekend, including Man City and Tottenham stars

Man United vs Arsenal: The decline of a once great rivalry

Andy Carroll was introduced for his second appearance since rejoining Newcastle over the summer but the onslaught continued as Vardy grabbed his second from close range.

Left completely unmarked, Vardy was left with the simplest of headers from substitute Marc Albrighton’s inch-perfect left-wing cross to deepen Newcastle’s misery in the 64th minute.

Leicester seemed content not to rub further salt in the wound but Ndidi scored their fifth in the final minute, collecting the ball with his back to goal in the area before dispatching beyond Dubravka.

talkSPORT.com rounds up all the latest transfer news and football gossip from Wednesday’s papers and online… Chelsea will offer a player-plus-cash swap deal for Atletico Madrid’s star goalkeeper Jan Oblak. The Blues’ are hoping to send out-of-favour goalkeeper Kepa Arrizabalaga plus £25million. Kepa has struggled this season and has been left out of their starting […]

Just a day after completing their second London demolition job of the season, Bayern Munich have unveiled a one-off commemorative shirt to celebrate their 120-year anniversary. The Bundesliga giants thrashed Chelsea 3-0 in their Champions League last-16 tie on Tuesday night, just four months on from demolishing Tottenham 7-2 in the same competition. The jersey features […]

Tom Breese is a UFC fighter that has been signed to the company for five years now, but he’s only fought twice in the past three-and-a-half years. The Birmingham product’s last outing was a Performance of the Night winner against Dan Kelly in Liverpool back in 2018 and now he is finally ready to return. […]

Tottenham forward Dele Alli has been hit with a misconduct charge by the FA for a post about the deadly coronavirus outbreak, as Jose Mourinho’s attacking crisis looks set to get even worse. In a video on Snapchat, Alli filmed himself wearing a face mask in an airport departure lounge accompanied by the message, ‘Corona […]

Lyon will be looking to hit back from their poor league form when they host Italian champions Juventus in their Champions League Round of 16 tie. The French side only just made it out of Group G and now face a huge task to reach the quarter-finals of Europe’s elite competition. Lyon are currently seventh […]

Nigerian young football freestyler Eche Chinonso recently entered the Guinness World Records. The 11-year-old had the most consecutive touches on a ball, 111 times, in a minute while balancing another ball on his head. Chinonso was delighted with breaking the record. “I want to prove to the world that anything is possible,” he said. World football […]