Solskjaer’s sie have now failed to pick up a win in their last three league games this season, having opened 2019/20 with a rampant 4-0 victory over Chelsea.

During his interim spell in charge he broke numerous records, including becoming the first United manager to win his opening six matches in charge and collecting the most points of any top flight manager in his first 10 games at the helm.

However, since getting the job for keeps he’s led United to just three league wins in 12 games, with supporters expecting a big improvement on that as the season wears on.

So how does Solskjaer’s record stand up against the rest of the Premier League after 25 games in the hot seat to date? 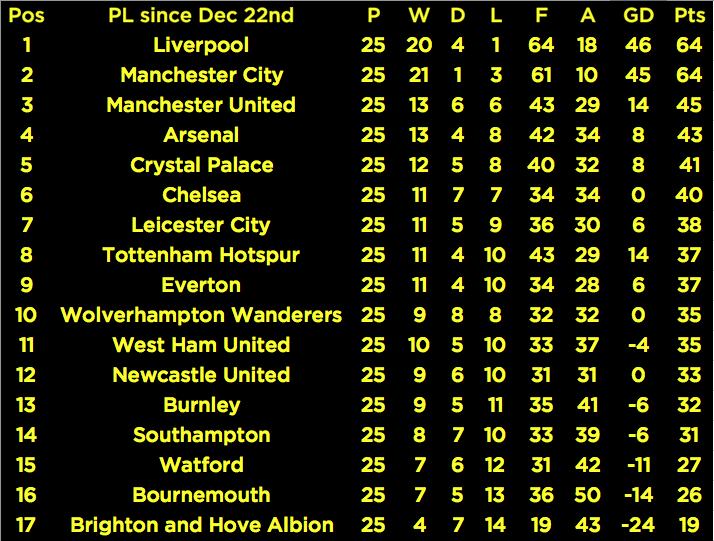 The above table shows that only Manchester City and Liverpool – who went head-to-head in a dramatic title race last season – have fared better than United since Solskjaer first took over at Old Trafford last December.

To date, Solskjaer has won 13 of his 25 league games in charge, giving him a 52 per cent win ratio.

He’s also overseen a run of six draws and six defeats which accumulates to a total of 45 points, putting the Red Devils two points ahead of fourth-placed Arsenal.

Unsurprisingly, City and Liverpool are well ahead at the top – a whopping 19 points in fact – with only goal difference putting Jurgen Klopp’s men on top.

Interestingly, Chelsea and Tottenham lie in sixth and eighth in the table respectively, while Brighton & Hove Albion are rock bottom of the pile – having won just four of their 25 league matches since Solskjaer’s return to United.

Crystal Palace, surprisingly, are ahead of both of their London rivals in fifth, underlining the superb job Roy Hodgson is doing at Selhurst Park.

Saturday is GameDay on talkSPORT and talkSPORT 2 as we become your go to destination for all the Premier League action.

We’ll bring you LIVE commentary of Premier League games across all three time slots on Saturday – 12.30pm, 3pm and 5.30pm – delivering award-winning coverage to more GameDay listeners than ever.

It’s fair to say that not many people were happy with Goldberg defeating Bray Wyatt for the Universal title. While WWE supposedly have their reasons for making the switch, fans were left furious with not only the result in Saudi Arabia, but the way it went down. One man that some fans might not expect […]

Fleetwood boss Joey Barton has been hit with a two-game touchline ban by the Football Association, as well as a £2,000 fine, for comments he made to a match official against Wycombe earlier this month. Barton, who denies the charge, will miss the League One side’s next two matches against Ipswich and Blackpool as a […]