The Premier League season is finally coming to an end, with the highest division of English football culminating this weekend.

Sunday is the final day of the 2018/19 campaign, with all 20 teams in action as the title race and battle for a top four finish are decided.

Manchester City and Liverpool have taken the fight for silverware down to the wire, with Pep Guardiola’s side one point ahead of their title rivals heading into the final day.

Meanwhile, Arsenal are hoping they can do the unlikely and overtake Tottenham to guarantee Champions League qualification.

talkSPORT.com explain all the permutations for the Premier League final day, below…

king of the north

Sunderland vs Portsmouth live on talkSPORT 2: Commentary and line-ups

How can Manchester City win the title?

If Man City beat Brighton by any scoreline, they will retain the Premier League trophy as they are already one point ahead of Liverpool.

A draw for City will be fine as long as Liverpool lose or draw their match against Wolves, while if City are beaten by Brighton they must rely on Wolves to defeat Liverpool to become champions.

How can Liverpool win the title?

Any defeat for Liverpool means they cannot claim the Premier League crown.

A draw against Wolves would win Liverpool the title if Man City lose to Brighton by at least four clear goals.

Winning against Brighton would move Liverpool onto 97 points. They will win the title if City draw or lose their match on the south coast.

Who will claim the final Champions League qualification place?

Man City, Liverpool and Chelsea are all guaranteed to finish in the top four, with Arsenal and Tottenham battling it out to claim the final spot.

Tottenham will finish in the top four if they win or draw against Everton regardless of Arsenal’s result.

The Gunners can only overtake Spurs if they beat Burnley and Tottenham lose to Everton, and there is an eight-goal swing. If this happens, Arsenal will finish ahead of Spurs on goal difference.

Who will qualify for the Europa League

Whichever one of Arsenal or Spurs fails to finish in the top four will instead qualify for the Europa League.

They will be joined by Manchester United, who are guaranteed to finish inside the top six.

Wolves have secured seventh place in the Premier League so could also qualify for the Europa League, though only if Manchester City beat Watford in next week’s FA Cup final.

If the Hornets claim silverware at the Wembley showpiece, however, they will qualify for Europe instead of Wolves.

Who has been relegated?

The relegation fight has already been determined heading into the final day, with Huddersfield, Fulham and Cardiff failing to secure top flight survival. The latter two drop back down to the Championship after just a single season in the Premier League. 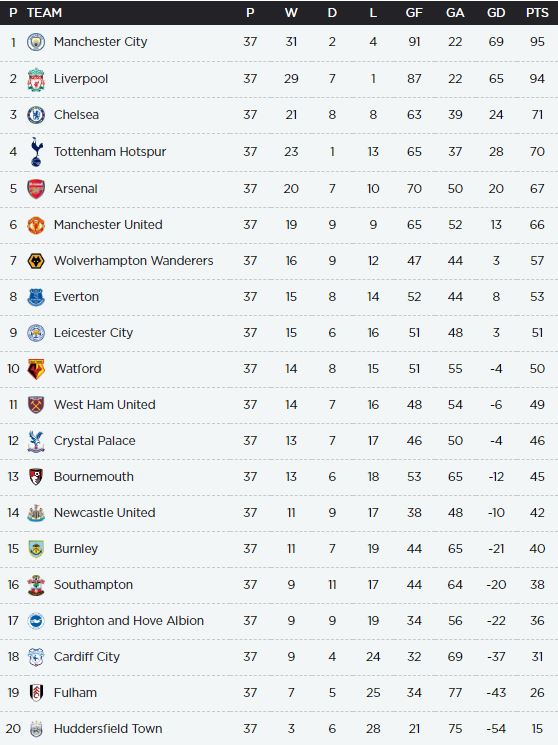 Matchday Live on talkSPORT takes you around all the Premier League grounds on Sunday’s final day, keeping you up to date with the title race and the battle for top four.

However, you can also tune into talkSPORT 2 to hear full commentary of Tottenham vs Everton, as Spurs look to guarantee Champions League qualification.

Aston Villa reached their first league cup final for a decade with a dramatic 2-1 victory over Leicester in the second leg of their semi-final at Villa Park. Trezeguet grabbed Villa’s stoppage-time winner to send the five-time victors to Wembley after Kelechi Iheanacho’s second-half strike had cancelled out Matt Targett’s 12th-minute opener to give Villa […]

Leeds produced a stunning comeback to seal a 3-2 win over Millwall and reignite their push for automatic promotion from the Championship. The Whites were 2-0 down at the break and in danger of seeing the buffer between themselves and the teams in the play-off spots wiped out. But three goals in 18 second-half minutes […]

Manchester United have raised their offer for Bruno Fernandes to €55million euros (£46.6m), plus a series of add-ons, according to reports. The Red Devils may have finally met Sporting’s valuation of the 25-year-old midfielder following a dramatic day in the transfer saga. Earlier on Tuesday, it was reported that Barcelona were interested in the Portugal […]

The transfer window closes this week and talkSPORT will keep you across all the big news, rumours and gossip right up until the deadline on Friday at 11pm. Tune in for the very latest news and expert reaction from former managers, players and top pundits and follow our live rolling blog below… Here are the […]

talkSPORT.com rounds up all the latest transfer news and football gossip from Tuesday’s papers and online… Manchester United failed with a late bid to sign Leeds United new boy Jean-Kevin Augustin as he was already on his way to Elland Road for a medical. The Championship promotion challengers pulled off a major coup by securing […]

Kenyan youngster Sidney Lokale made his debut for Finnish top-tier side HIFK as they played to a 1-1 draw with Honka in a Finnish Cup game played on Sunday at the Tapiolan Arena. Brazilian midfield Carlos Tiquinho opened the scoring in the sixth minute but Lucas Kaufmann levelled the scores in the 57th minute from […]

Koffee: Youngest and first woman ever to win Grammy for Best Reggae Album