Jamie Cureton marked his 1,000th senior club appearance in typical fashion, as he notched a brace in Bishop’s Stortford’s 3-2 win over Brightlingsea Regent on Easter Monday.

Cureton – who has played for 18 clubs during his 25 years in senior football – is still producing the goods on the field at the rip old age of 43.

Well what can I say about today making my 1000 appearance in football. First it was a great performance by the boys and another win which keeps us in the playoffs with one to play. Would like to thank @BSFCTheBlues for putting on such a great day

After a special presentation to celebrate the historic day, Cureton soon made his usual impact on the pitch by scoring a quick-fire double for his side.

The striker has been renowned for being a fox in the box throughout his career, plying his trade at the likes of Norwich, Bristol Rovers and Reading.

The Bostik League Premier Division outfit will be hoping Cureton continues in the same vein for the rest of the season as they go in search of a play-off spot.

The 10 fastest goals in Premier League history, including, Long, King, and Viduka

The Premier League teams most used as hacked passwords

Guardiola unhappy with Solskjaer's 'tactical foul' accusations ahead of derby 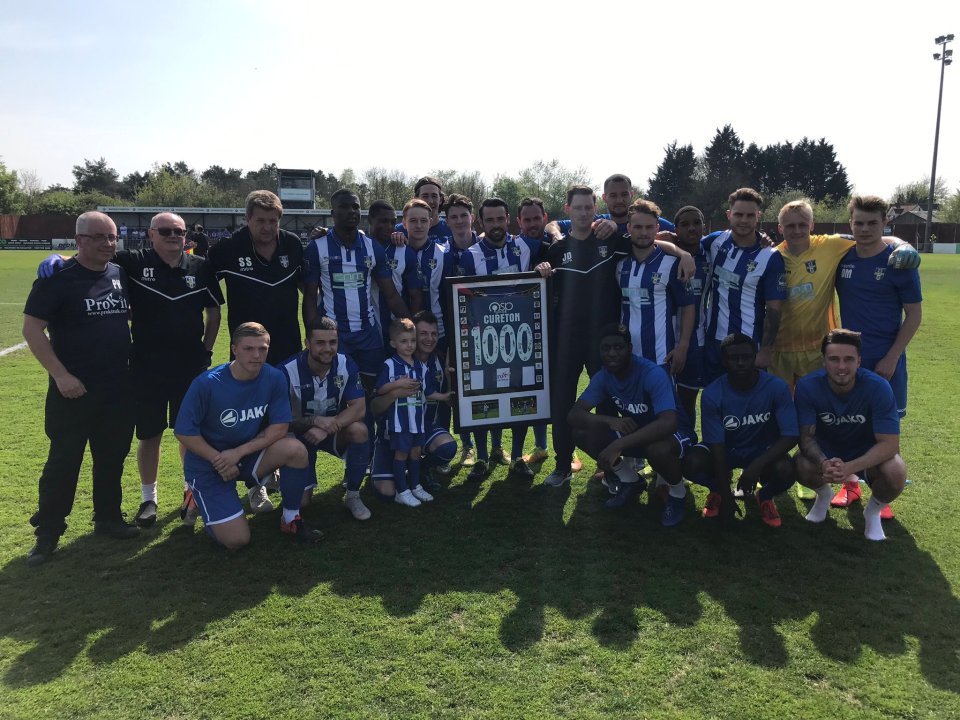 The Bishop’s Stortford player/manager is one of just 29 players in the world to reach the milestone.

43 year old @JamieCuro has the remarkable record of having scored in each of England’s top 7 tiers! pic.twitter.com/BwfQZXNsXW

Cureton was withdrawn with five minutes remaining, receiving a standing ovation from the 640-strong crowd at the ProKit UK Stadium.

The experienced front man is just one of 29 players in the world to reach the historic milestone of making 1,000 senior appearances.

Check out the top 10 in the table below!

Manchester United boss Ole Gunnar Solskjaer has invited world heavyweight champion Tyson Fury to deliver a motivational speech to his squad. The ‘Gypsy King’ flattened Deontay Wilder last Saturday night in Las Vegas to claim the WBC and Ring Magazine heavyweight titles in emphatic fashion and cement his standing as the best in the world. […]

Arsenal have reportedly attempted to revive contract talks with star forward Pierre-Emerick Aubameyang. Aubameyang, 30, has been in excellent form this season, and he currently sits as the Premier League’s joint-leading scorer for 2019/20 with 17 goals in only 25 appearances. However, doubts have been raised over his future as his contract expires at the […]

Fans of ADO Den Haag confronted Alan Pardew during a training session in protest at the manager’s poor tactics. In a scene reminiscent of Mike Bassett: England Manager – presumably without as much swearing – the disgruntled supporters of the Eredivisie side brought flipboards and tactics sheets to remonstrate with the squad. Around 10 beleaguered […]

Real Madrid will attempt to lure Liverpool star Mohamed Salah to the Bernabeu once they sell Gareth Bale, reports claim. The Reds could face a fight to keep hold of their forward, with Real understood to be plotting a £126million bid for Salah. However, the Spanish giants want to offload the injury-prone Bale first. Bale, […]

Neil Warnock has joked Sergio Ramos clearly didn’t fancy a trip to drizzly England after he was sent off in Real Madrid’s 2-1 Champions League defeat to Manchester City. There was a familiar scene at the Bernabeu as the Spanish centre-back was given his marching orders for a last-man challenge on Gabriel Jesus. Remarkably, that […]

Renowned lawyer and human rights defender Njonjo Mue on Thursday afternoon held a solo prayer at Uhuru Park for ‘the fall of President Uhuru Kenyatta’. Mr Mue had asked Kenyans to join him for prayers to ask God to remove President Kenyatta from power, but his calls went unheeded as only he and a handful […]