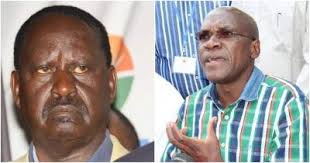 Khalwale had tweeted a photo-shopped image of Raila with a caption, “Police in Ugunja, are looking for an MP-elect for having caused actual body harm to a leader of a political party during a by election.”

Police in Ugunja, are looking for an MP-elect for having caused actual body harm to a leader of a political party during a by election pic.twitter.com/gAnW06CABM

This was a mockery after ODM party aspirant Chris Karani was floored by Hon David Ochieng’ of Movement for Democracy and Growth party in the concluded Ugenya Constituency by elections.

He has suffered irreparable reputational damages from the trolls on social media subject to his act of misdemeanor against Raila.

Here are some of the comments.

I am ashamed! Very ashamed to be a luhya indeed.. a whole Doctor doing such mediocrity to appease his boss online🤷🏽‍♂️ Oparanya needs another term**I wish** this kind of leaders are a nuisance

This tweet is from Boni Khalwale, a medical doctor, a former long serving MP and 1st Senator of Kakamega county who is also seeking to succeed Hon Oparanya as Governor. Its also important to note that he is over 50yrs old, a polygamist & father of many.

Move on. You lost miserably yourself.

Here are the top Liverpool stories on talkSPORT.com and follow our live blog below for the latest news and rumours involving the Reds… Remembering the time when Liverpool struggled against a non-league side in the FA Cup Roberto Firmino hits late winner for Liverpool at Wolves as Jurgen Klopp’s men extend Premier League unbeaten run […]

Is Ole Gunnar Solskjaer the right man to lead Manchester United back to their former glories? Well, the stats do not exactly do him any favours… For the first time since the inaugural 1992/93 Premier League campaign, the Red Devils have failed to reach 40 points after 24 games – making it their worst season […]

Tottenham visit Southampton in the FA Cup fourth round this weekend – live on talkSPORT – and it’s clash which will bring back fond memories for Spurs fans. Former Liverpool star Ronny Rosenthal spent three seasons at White Hart Lane in the twilight of his career and his best moments in a Tottenham shirt came […]