The Premier League has passed the halfway mark and we are now officially into the second part of the 2018/19 season.

Liverpool are currently leading the title race with Manchester City their closest challengers, while a good six clubs are all fighting off the threat of relegation.

The Reds’ rise to serious contenders for silverware has coincided with the purchases of defender Virgil van Dijk and Alisson, the goalkeeper – two players regarded as among the finest in England’s top flight.

That duo, along with Liverpool’s amazing front three of Mohamed Salah, Roberto Firmino and Sadio Mane, have helped Jurgen Klopp’s side get ahead of a Man City team that features fine players such as Sergio Aguero, Kevin De Bruyne, David Silva and Ederson, their own world class goalkeeper.

Brilliant players can be called upon by teams all throughout the division, and it’s no surprise Paul Pogba has finally started to show off all his talents over the past couple of weeks since Jose Mourinho was sacked by Manchester United.

Where Messi, Ronaldo, Kane and Salah finished among the leading scorers in 2018

Chelsea loanee, three Leeds stars, none from Norwich – Championship team of the season

Marco Rose profile: The Salzburg boss is pals with Jurgen Klopp and likes to attack

11 times a football transfer caused fans to scream with rage

Further down the league you have the likes of Richarlison at Everton, West Ham’s star attacker Felipe Anderson, and Ben Foster, who continues to prove his quality in goal for Watford.

But who have been the best players in the 2018/19 Premier League so far?

With the help of the stats experts at WhoScored.com, talkSPORT have taken a look at the team of the season after 20 matches, as we welcome in a new year which we hope will bring us just as much footballing entertainment as the previous 365 days.

You can see the WhoScored.com Premier League team of the season below… 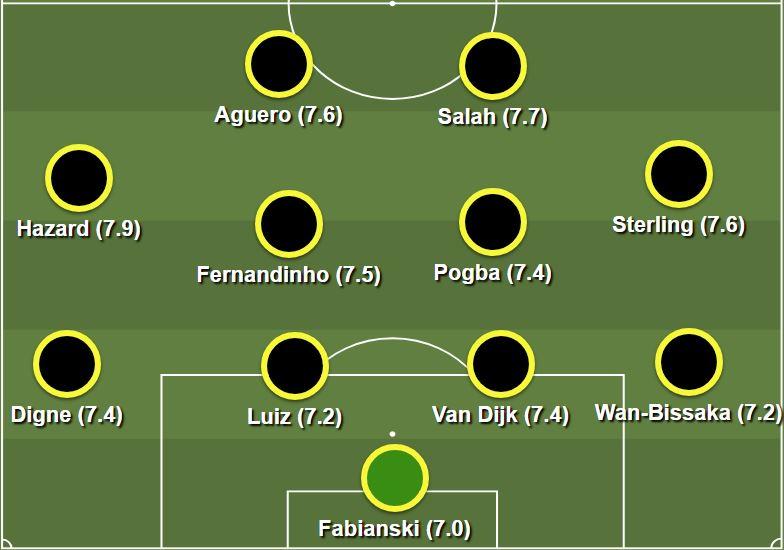 5 thoughts on “Premier League 2018/19 team of the season: The best players in the top flight so far based on stats”

Manchester United have raised their offer for Bruno Fernandes to €55million euros (£46.6m), plus a series of add-ons, according to reports. The Red Devils may have finally met Sporting’s valuation of the 25-year-old midfielder following a dramatic day in the transfer saga. Earlier on Tuesday, it was reported that Barcelona were interested in the Portugal […]

The transfer window closes this week and talkSPORT will keep you across all the big news, rumours and gossip right up until the deadline on Friday at 11pm. Tune in for the very latest news and expert reaction from former managers, players and top pundits and follow our live rolling blog below… Here are the […]

talkSPORT.com rounds up all the latest transfer news and football gossip from Tuesday’s papers and online… Manchester United failed with a late bid to sign Leeds United new boy Jean-Kevin Augustin as he was already on his way to Elland Road for a medical. The Championship promotion challengers pulled off a major coup by securing […]

Adrian Durham is not getting caught up in the hysteria surrounding Arsenal’s teen sensation Gabriel Martinelli. The 18-year-old striker has made an electric start to life at Arsenal, with ten goals already in all competitions, despite starting on the bench most weeks. Legendary Brazil star Ronaldinho expects his young compatriot to achieve greatness, even comparing […]

We’ll keep you updated with all the latest Manchester United news as transfer deadline day nears. Ole Gunnar Solskjaer has hinted at doing a few deals this month but, as yet, United have not signed anyone. Follow our live blog below for the latest updates on the club…

Kenyan youngster Sidney Lokale made his debut for Finnish top-tier side HIFK as they played to a 1-1 draw with Honka in a Finnish Cup game played on Sunday at the Tapiolan Arena. Brazilian midfield Carlos Tiquinho opened the scoring in the sixth minute but Lucas Kaufmann levelled the scores in the 57th minute from […]

Koffee: Youngest and first woman ever to win Grammy for Best Reggae Album