The transfer window has officially reopened and it is expected to be a busy January for Chelsea.

As well as moving around a number of their loan players from one club to another, the Blues could be selling and buying stars for Maurizio Sarri’s first-team.

Cesc Fabregas, the Spain midfielder, is one player backed to leave Stamford Bridge this month, while doubts also remain about David Luiz’s future in west London given his contract expires at the end of the season.

Sarri has plans to strengthen his side before the end of the month, and, if reports are to be believed, a number of deals have already been lined up by Chelsea.

But how could the Blues look come the close of the transfer window and the beginning of February?

talkSPORT.com have assessed the possibilities to create Chelsea’s potential starting line-up at the end of the January transfer window, which you can see below…

The end for Ozil at Arsenal? World Cup winner fails to make squad vs Fulham

Where Messi, Ronaldo, Kane and Salah finished among the leading scorers in 2018

Chelsea loanee, three Leeds stars, none from Norwich – Championship team of the season

Starting from the back, Chelsea will end January unchanged. Kepa Arrizabalaga was made the world’s most expensive goalkeeper throughout the summer and he has slotted into Sarri’s team fluidly in the months since.

Sarri has stuck with a consistent back four during his time as Chelsea’s manager, with Cesar Azpilicueta, Antonio Rudiger and Marcos Alonso starting all of the Blues’ 20 Premier League matches so far. David Luiz, the centre-back, completes Sarri’s first-choice defence, though the Brazilian has been rested for one game.

Wholesale changes are unlikely, but Luiz could be replaced given he becomes a free agent in six months and there is no sign a new contract is close.

Germany defender Mats Hummels has been linked with a January move to Stamford Bridge with Bayern Munich, his current club, willing to sell. £30million will be enough for Chelsea to afford Hummels, who would slot into the back-four alongside his national team-mate Rudiger.

Jorginho, a summer signing from Sarri’s former club Napoli, is guaranteed to remain Chelsea’s metronome at the base of midfield, and N’Golo Kante’s improvement over the past couple of months ensures he will continue in the box-to-box role.

Sarri is still yet to decide upon who is first-choice for the final midfield position. Mateo Kovacic has played the most of the three options, though Ross Barkley has been used in heavy rotation and Ruben Loftus-Cheek has impressed in occasional cameos.

However, links with a January swoop for Nabil Fekir suggest Sarri remains unhappy with the above options and is on the hunt for a player who offers a greater goal threat, as Marek Hamsik provided for his Napoli team.

Scoring goals has not only been a problem for Chelsea’s midfield, however, with their attack also struggling to find the back of the net.

Eden Hazard is as reliable as ever and a departure from Stamford Bridge in January is unlikely; the Belgium international’s future is in doubt past the end of the season rather than this month.

However, Willian and Pedro are not regular goalscorers, and neither Olivier Giroud nor Alvaro Morata have proven themselves to be the top class centre-forward Sarri requires.

Callum Wilson of Bournemouth is reportedly a shock target for the Blues, while Sarri is claimed to have wanted Gonzalo Higuain at Stamford Bridge since the summer.

The interest in Higuain has been renewed over the past couple of weeks, and the Argentina international moving to Chelsea could well be on the cards.

He would be the prime target – having impressed when playing under Sarri previously – with Wilson more likely a backup option for the west Londoners.

With a new centre-forward brought in, Sarri’s attentions would turn to improving his wide options, and a deal taking Christian Pulisic to Chelsea has been widely mooted – and even allegedly ‘confirmed’ on social media.

However, there are conflicting reports over whether Pulisic, the United States forward, would arrive in January or at the end of the season when his transfer from Borussia Dortmund is agreed.

Should he link up with the Blues this month, Pulisic has been backed to make the right-wing position his own, with Hazard retaining his place on the left of Sarri’s front three. 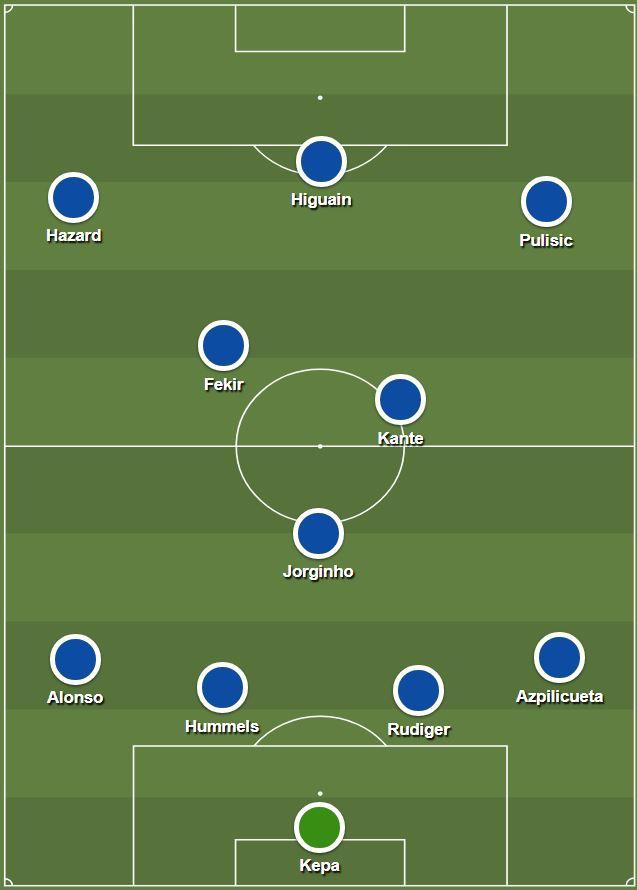 16 thoughts on “Chelsea transfer news: How Blues could line-up at end of January window with Mats Hummels, Nabil Fekir and a new striker”