18 top-flight teams are in action, with Fulham vs Wolves starting things off at midday and Watford vs Chelsea closing the day out.

There is sure to be plenty of drama and we take a look at some of the main talking points heading into the festive fixtures.

After a resounding victory at Cardiff in his first match as interim manager of Manchester United, Ole Gunnar Solskjaer will take his place in the Old Trafford dugout on Boxing Day.Dubbed a ‘super-sub’ for much of his time as a player with United, the Norwegian – who replaced Jose Mourinho last week – will no doubt feel comfortable in his surroundings.

Solskjaer could hardly have wanted a better opponent either, with visitors Huddersfield having picked up just five points on the road so far this season and on a five-match losing streak.

Can Benitez cause a shock and hand out a first defeat of the season on old boys Liverpool?

Liverpool boast a four-point lead at the top of the table at Christmas after beating Wolves last Friday and seeing title rivals Manchester City crash to a surprise defeat at home to Crystal Palace the following day.

Jurgen Klopp’s Reds remain undefeated in the league with almost half of the season gone and former boss Rafael Benitez takes his Newcastle side to Anfield on Boxing Day.

Benitez said it would be a ‘miracle’ if the Toon stayed in the Premier League this season but a shock win over his former employers, with Newcastle having lost just twice on the road this season, would be a good place to start.

Victory over Burnley on Saturday, coupled with Chelsea’s home loss to Leicester, has seen them draw level on 37 points with the Blues – who currently occupy fourth spot on goal difference alone.

Arsenal travel to Brighton on Boxing Day looking to avenge defeat there under Arsene Wenger last season, while Chelsea will be looking to keep hold of their place in the Champions League positions by seeing off Watford in the day’s late kick-off.

Bottom at Christmas, can Ranieri instigate another Premier League miracle by saving Fulham?

Fulham need to join a select club if they are to remain a top-flight side heading into next season.

Only three teams have ever survived relegation from the Premier League when bottom at Christmas – but if there is one man who knows how to beat the odds it is manager Claudio Ranieri.

The Italian guided Leicester to a 5000/1 Premier League title success in 2016 and can start another fairytale story with victory at home to Wolves on Boxing Day.

Spurs looking to well and truly join the title race

While Liverpool host Newcastle and Manchester City head to Leicester, Tottenham will be looking to keep themselves on the periphery of the fight for the title.

Mauricio Pochettino may have been linked with the full-time managerial role at Manchester United but his Spurs side impressed with a 6-2 win at Everton on Sunday.

On Boxing Day they host Bournemouth knowing that, if results go their way, they could finish the day in second place.

The Boxing Day fixtures in full… 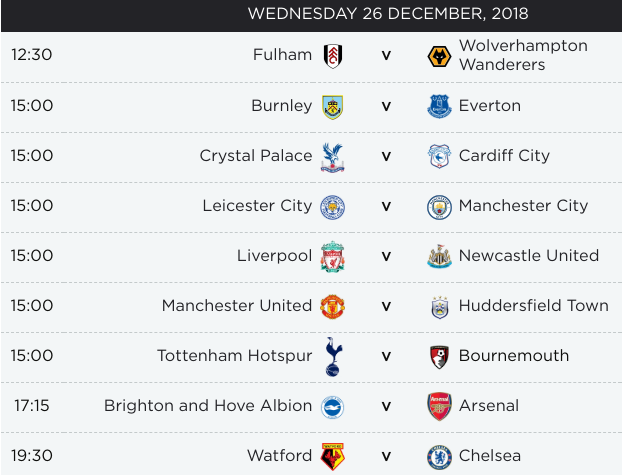